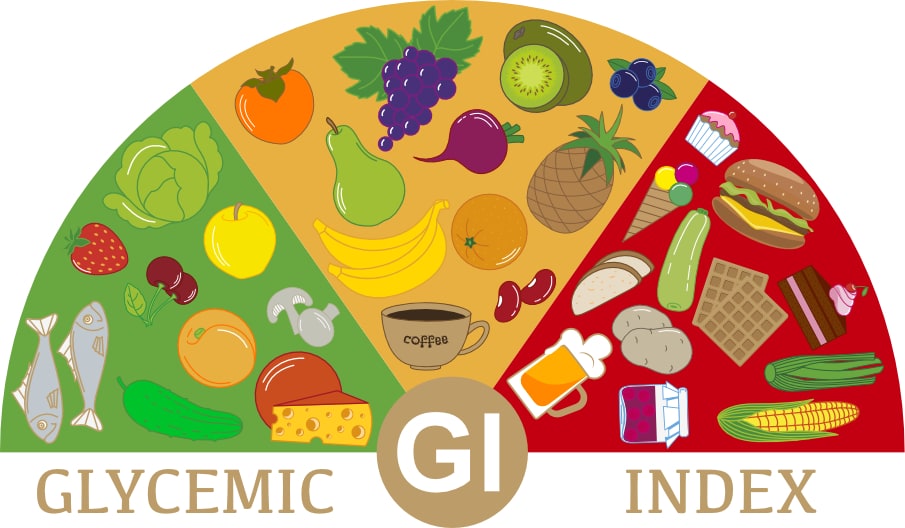 Glycemic index and Glycemic load: understanding will help you choose the healthiest foods and avoid  the traps of false advertising. Chef V explains. Vital information for people with diabetes and those who want to avoid getting it.

Just the facts/bottom line:
Pick foods with a Glycemic index under 60 and a Glycemic Load under 15.
Look for lower numbers.

I feel sorry for carrots. Watermelon, too. You see, these two healthy foods are often vilified by health extremists for supposedly having too much sugar. They argue that carrots and watermelon rank very high on the glycemic index.

Before I come to the defense of carrots and watermelon, let me explain what the glycemic index is….

Glycemic Index Defined: What’s the glycemic index and can it help manage diabetes

Put simply, the glycemic index is a ranking of foods (and drinks) with carbs. A score of 70 or greater is high. And a score of 56-69 is medium on the glycemic index (GI). A low score is 55 or less. The higher the number, the more quickly the carbs in foods converts into sugar in your blood. Veggies like broccoli have a score of 0. Watermelon ranks 72. And raw carrots is almost at the top of the charts: 93. Considering that a croissant ranks 95, does that mean having a carrot is almost as bad as indulging in a French pastry?

No, it doesn’t. While the GI can be a useful tool for managing diabetes, it does have some shortcomings. 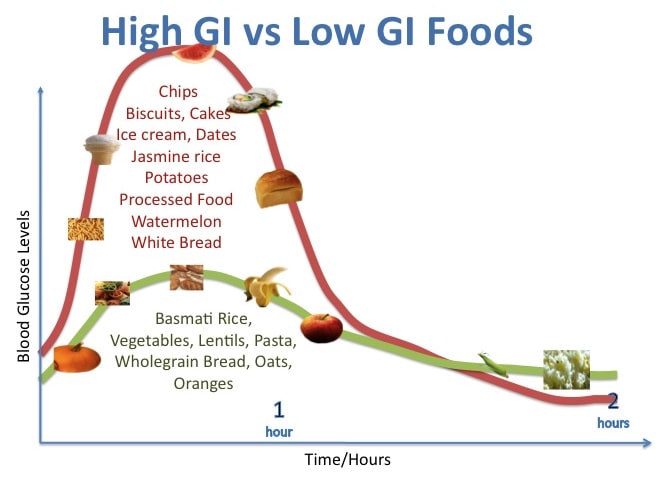 The Glycemic Index measures the potential effects of carbs on your blood sugar within a two-hour window after eating. What’s the problem with this? Well, if you have diabetes, eating carb-rich foods can affect your blood sugar levels for up to four hours.

Second, the GI often does not take into account the precise amount of carbs eaten at one time. When the GI was established in the early 1980s, the researchers created it to analyze the effect of carbs on blood sugar (glucose) like a bell curve. In other words, it’s not scientifically very accurate. And not just because it’s only a two-hour window. But also, because it measures the food following a 12-hour fast. Moreover, the amount of carbs that it tests to rank it on the GI scale is approximately 50 grams. Thus, depending on the food, even though it might rank high on the GI, it doesn’t mean it’s going to spike your blood sugar.

Glycemic Index VS Load: Why the glycemic load is more accurate

Unlike the glycemic index, If a certain food ranks high on the glycemic load scale, it’s safe to assume it’s not good for diabetes management. The GL is figured out by taking the amount of grams of carbs in a food and multiplying that by the food’s glycemic index score. Then, you take that number and divide by 100.

But you know what, don’t worry about potentially confusing diet math right now. What’s more important is understanding this biggest difference between glycemic index vs load. And let’s use as an example the one veggie and fruit that often get a bum rap. I’m referring of course to carrots and watermelon.

Remember, watermelon ranks high on the GI at 72. But it’s glycemic load is low, only 7. And carrots, despite having a potentially blood-sugar spiking score in the 90s only has a GL score of 1. Yes, that’s not a typo. In other words, according to the glycemic load score, carrots have little risk of converting into blood sugar.

How can this disparity exist? Isn’t it really confusing if you’re trying to manage your diabetes? The answer to the second question: yes, totally. I feel your pain. When I was studying for my certified nutrition therapy coursework, I was confused by the difference between the glycemic index vs load. But, again, the simple difference between the two is that the glycemic index does not take into account serving sizes. That means if you only eat one large raw carrot, that carrot may have a negligible effect on your blood sugar. 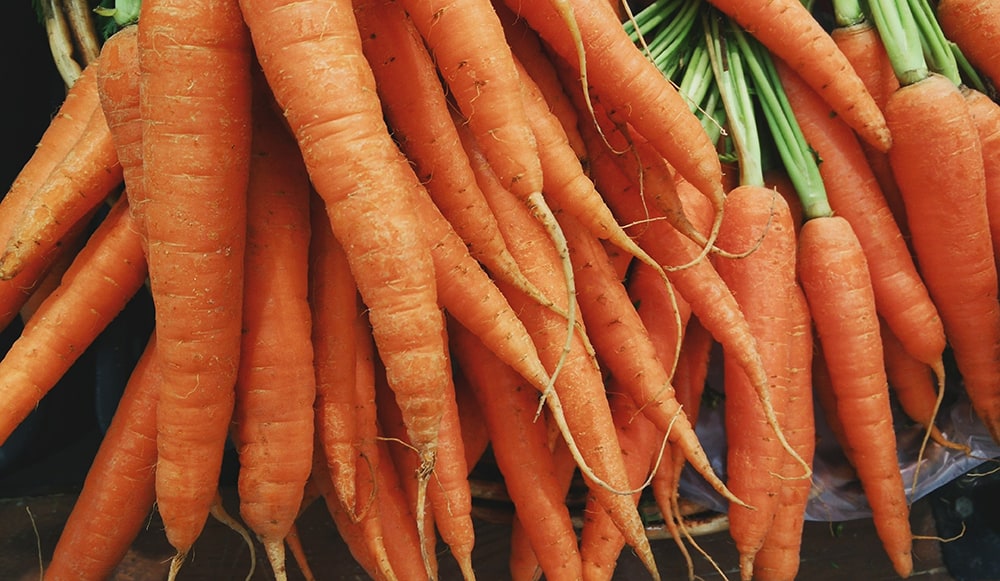 The reason why the glycemic load of watermelon and carrots is so low is that both of them contain no fat and protein. Foods that contain fat and protein have a lower glycemic index. Because theoretically, protein and especially dietary fat can reduce the effect of carbs converting into sugar. This is why peanut butter M&Ms have a relatively-low score on the GI: 33. Does that mean you should eat more peanut butter M&Ms and less watermelon and carrots? Of course not. This exemplifies how the glycemic index isn’t always a great tool for managing diabetes.

In addition, the glycemic index as well as the glycemic load do not take into account the cooking methods of a particular food. For example, did you know that al dente pasta has a lower glycemic load than soft, mushy noodles? That’s because your digestive system has to work harder to break down al dente pasta. Also, the indexes don’t account for how ripe or raw a food is. Take bananas, for example. Green-tipped bananas (eaten with nothing else) will cause less of an insulin response than a really ripe banana.

That’s why yet another index, the insulin index, might be an even better determinant of the effect of a food on your blood sugar level. According to the insulin index, pasta really isn’t that bad for you. That’s not to say if you have diabetes and you’re doing your best to reverse it, you should eat it. But one small serving of it, especially if you drizzle it with olive oil and have a lean, small portion of meat on the side, is relatively low on the insulin index. How can this be? Well, it takes longer than white bread and other starchy carbs for pasta to break down into sugar. 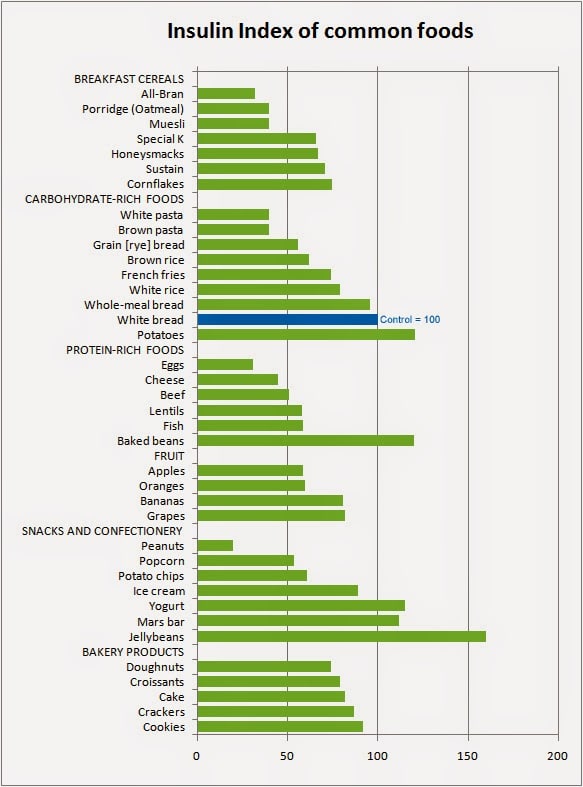 As always, the emphasis on eating should focus on foods rich in fiber (which also slows down the conversion of carbs into glucose), especially leafy green and cruciferous veggies (such as those in Certified Organic Green Drinks). And if you’re trying to normalize your blood sugar levels, your meals should satisfy you enough so that you can go several hours in between meals without feeling hungry. That means you need enough dietary fat and protein to balance out the carbs.

And this is a topic for another blog post about diabetes management, but in general, you can safely eat a moderate amount of fruit without worrying about it skyrocketing your blood sugar. Try to eat a handful of nuts along with the fruit. The protein and fat in the nuts will further slow down any potential for the fruit sugar converting to sugar in your blood.

But also keep in mind that if you eat a huge portion of meat, some of that protein can be converted into blood sugar. This is another limitation of the glycemic index. According to the index, meat ranks 0. That’s because meat doesn’t have any carbs.

Another reason the glycemic index isn’t a panacea for weight loss and diabetes management is two completely different foods can rank the same on the GI. But one of those foods can produce an insulin response that skyrockets your blood sugar level whereas the other food can have a much lesser insulin response.