Can the answer to managing diabetes be as simple as chugging a 16 oz. glass of juice every day? Not if it’s orange juice, or other fruit juice. But managing diabetes with blended veggie juice like Chef V’s Organic Green Drink is an easy, sustainable solution.

Whitney Louis is one customer living with diabetes who credits Green Drink with helping manage her A1C levels. Take a look at Whitney’s Instagram profile. (Her tongue-in-cheek profile name: HappyPancreas).

“Diabetes makes it super hard to follow cleanses because many out there are juice based (i.e. 100% sugar). This requires a lot of [monitoring], and increases the variability in our blood sugar numbers,” says Whitney.

“The foundation of Chef V is BLENDED super greens so the fiber stays put and blood sugars keep stable … [and] if you are seeking the ultimate reset: minimizing cravings, removing built up toxins, calming inflammation, increasing your insulin sensitivity, AND shedding a few stubborn lbs…. this is a great starting point!” adds Whitney.

Now it might sound like Whitney is a paid shill for Chef V. She’s not. Whitney is just sharing with her followers what she believes is one easy [and tasty] solution for managing diabetes. She says on her blog:

“p.s. not sponsored, just showing the love when well deserved! they ship to your door and available across the u.s.“ 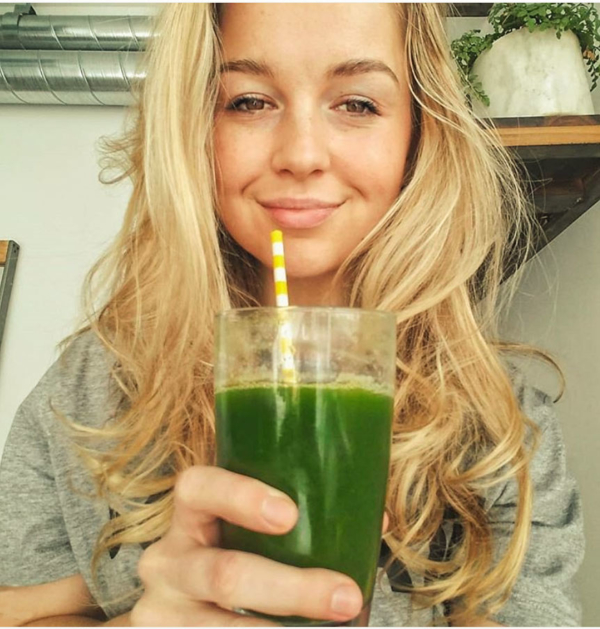 Challenges of Living With Diabetes

Living with diabetes can be a struggle to say the least. There’s the maddening healthcare system to deal with. Who knows which way the political winds will blow from one week to the next. Hopefully, you—and the other at least 29 million people in the U.S. living with diabetes—will have adequate health coverage to manage your diabetes.

In addition, there’s the increasing stigmatization of having diabetes. Feelings of guilt or shame can lead to anxiety or even depression about having diabetes. Some people, despite well-meaning intentions, are quick to judge and state the obvious: stop drinking soda. Don’t eat fast food. Reduce your sugar intake.

These type of blanket statements fail to account for two things. First is the the emotional/psychological reasons why some people with diabetes (more specifically, type 2) turn to unhealthy foods and drinks. The reward mechanism in the brain is powerful to ignore. Did you have a rough day at work? Did you get into a fight with your spouse? The carton of ice cream in your freezer tells you that you’ll feel much better if you consume the whole tub. You know you won’t. But the dopamine receptors, those feel-good brain chemicals are powerful. And, at times, impossible to ignore.

The second reason relates to the first. Sugar is very addictive. Sugar addiction support groups exist. But they aren’t ubiquitous like AA meetings. You might not have access to a group in your hometown. 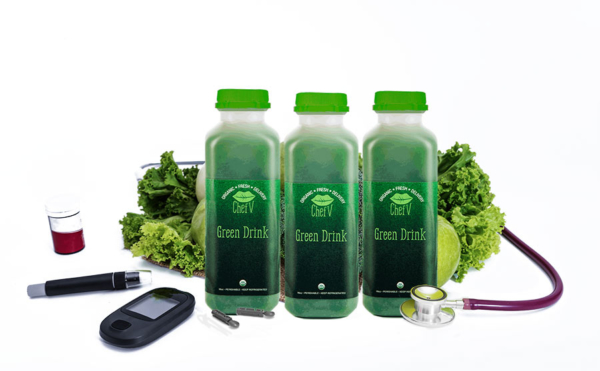 To better manage your diabetes, it may be best to try one simple solution at a time, rather than try following all the advice of a so-called health guru at once. So what is one easy solution? One that doesn’t just tell you what to do, but also takes into account the possible emotional and psychological components of type 2 diabetes?

The solution comes in the form of a delicious drink from Chef V, Organic Green Drink. The creator of Green Drink is Veronica Wheat Kress. A former private chef, her recipe for this drink became such a hit with friends, family and clients, that she decided to launch a business delivering all over the country this delicious drink that can help manage your blood sugar levels.

If drinking fruit juice is a ritual/habit that’s hard for you to kick, Green Drink just might be a healthy substitute. To be sure, some veggie juices taste like grass clippings. Healthy habits that will help normalize blood sugar levels won’t stick if it tastes nasty.

Of course, you’ll have to try Chef V’s Organic Green Drink for yourself. Taste is subjective. But don’t take our word for it. Several Chef V customers have been drinking Green Drink for years. 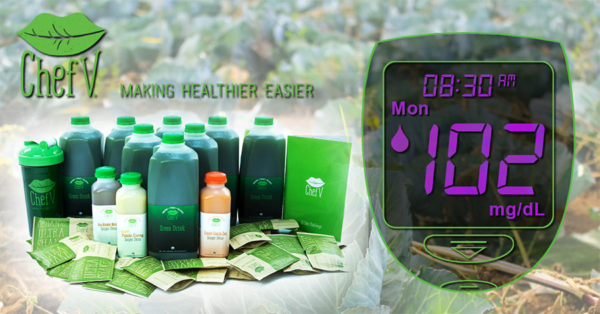 What is Organic Green Drink?

Chef V is the only company that overnight delivers 100% Certified Organic Green Drinks in the U.S. Each Green Drink contains seven cold-blended green veggies. Each of these superfood green veggies helps normalize blood sugar levels. Take kale, for example. Kale is clinically-proven to lower blood sugar levels after you eat a meal. But if you’re not used to eating/drinking healthy foods and crave sugar, you might be thinking, “Oh, hell no! I ain’t touching that nasty kale!”

But here’s the thing….

Organic Green Drink is sweetened with just the perfect amount of organic apple juice. Not enough to spike your blood sugar but just enough to satisfy the sweet tooth. And you’re not really going to taste the kale. To be sure, Organic Green Drink does not taste like soda. So if that’s what you’re expecting, Green Drink might not be the easy blood-sugar-management solution for you.

However, you might be pleasantly surprised with Organic Green Drink. Give it a try. And if you don’t like it, no worries. We’ll fully refund your purchase. Though not official, one of Chef V’s mottoes is, “A green drink a day keeps the doctor away.” Similarly, a green drink a day (16 oz), might just help you manage diabetes.

Chef V on helping your family to live a healthier life